Up to 2.4 million people in the United States are living with chronic hepatitis B and most are unaware of their infection. The month of May is designated as Hepatitis Awareness Month, with May 19th marking Hepatitis Testing Day! Organizations across the country dedicate this month to increasing awareness about viral hepatitis as well as promoting vaccination and testing.

Visit and connect with Hep B United local partners for more opportunities to get involved!

Hep B United operates in 22 states, 30 cities and Washington, D.C.

Aug. 13, 2021 – The U.S. Centers for Disease Control and Prevention has awarded a $1.375 million, five-year grant to the Hepatitis B Foundation to continue leading and expanding Hep B United, a nationwide coalition that operates in collaboration with the Association of Asian Pacific Community Health Organizations (AAPCHO).

Hep B United is dedicated to reducing the health disparities associated with hepatitis B. With the new funding, the Foundation and AAPCHO will build the capacity of community coalitions to increase hepatitis B education and testing and improve linkage to care in a culturally and linguistically responsive manner for communities disparately impacted, including Asian Americans, Native Hawaiians and Pacific Islanders, African Immigrants and persons who inject drugs.

END_OF_DOCUMENT_TOKEN_TO_BE_REPLACED

Cross-posted from nvhr.org
NVHR joined our partners at NASTAD, Hepatitis B Foundation, and Hep B United to host a virtual Viral Hepatitis Policy Summit and Hill Day on February 17 & 18. The virtual event was an opportunity for advocates and federal partners to share information and engage in discussion about strategies and priorities at the federal level to eliminate viral hepatitis.

Over 100 advocates from around the country participated in the Viral Hepatitis Policy Summit, making it the largest one ever. The advocates heard from and engaged with CDC & HHS officials on a range of topics, including viral hepatitis elimination planning, health equity, strategies to expand hepatitis B & C testing and hepatitis A & B vaccination, the impact of COVID-19, scaling up comprehensive harm reduction and syringe services programs (SSPs) for people who inject drugs, and the importance of robust funding.

Several advocacy priorities surfaced during the summit. Advocates highlighted the importance of moving towards universal hepatitis B testing and vaccination; addressing Medicaid barriers and restrictions to treatment and access to care; advancing innovative viral hepatitis testing technologies; addressing stigma and discrimination; supporting people who use drugs; and maintaining a strong health equity lens in our goals and messaging.

END_OF_DOCUMENT_TOKEN_TO_BE_REPLACED

Cross-posted from HepVu.org
Kate Moraras is the Deputy Director of Public Health at the Hepatitis B Foundation and the Director of Hep B United.

Q: You currently work as Deputy Director of Public Health at the Hepatitis B Foundation and as the director of Hep B United. How did you first become involved in Hepatitis B and how has the field changed in recent years?

When I first started working in the Hepatitis B field, I was on a fellowship at the Office of Minority Health with the Department of Health and Human Services. I was already familiar with Hepatitis B and understood that it was the single greatest health disparity for Asian Americans and Pacific Islanders at the time. I became more engaged with this issue over time and eventually made my way to the Hepatitis B Foundation. Coincidentally, when I started with the foundation, I learned that I had an uncle who is living with Hepatitis B. Ever since, my professional dedication to Hepatitis B knowledge and engagement became more personal.

In recent years, conversations about Hepatitis B have evolved. Originally, Hepatitis B was generally known as an Asian American health issue since more than half of chronic Hepatitis B cases in the U.S. are amongst Asian Americans and Pacific Islanders (who only make up about 6% of the U.S. population). However, in the past 6 years or so, Hepatitis B infections have steadily climbed amongst rural communities and younger populations – primarily due to injection drug use tied to the opioid epidemic. All this considered, I believe that Hepatitis B needs to be seen in the context of racial discrimination to align with the social justice conversations we’re having today. We have started to highlight these realities and are seeing prioritization of messages that encourage testing to address the gaps in adult hepatitis B vaccination rates.

These new screening guidelines are not effective. The Hepatitis B community is disappointed to see that the task force put out a recommendation that was quite similar to what has been in place since 2014, and did not encourage universal screening of all adults for Hepatitis B. Six years have passed, but we are not seeing the necessary changes being made. The USPSTF statement also mirrors what the CDC has been recommending for ten years: people who are high-risk should get screened. We have evidence that this is not enough. Estimates show that up to 75% of Hepatitis B-infected individuals remain undiagnosed. I think it’s time that we look at a universal screening recommendation because there are clearly gaps in risk-based screening.

END_OF_DOCUMENT_TOKEN_TO_BE_REPLACED

Cross-posted from HHS.gov Hepatitis Blog
While the United States is taking action to address recent spikes in acute viral hepatitis infections around the country, we must not forget the more than 2 million Americans living with chronic hepatitis B, over half unaware of their infection and at risk of developing liver disease, including liver cancer. Communities at risk of chronic hepatitis B infection are often the most vulnerable and face barriers to health care access including language, cultural, transportation, housing, and other social resource needs. There is a lot to learn from partners across the nation that can be useful when adapted to other communities.

What is Hep B United?
Recognizing the gaps in coordinated hepatitis B education, prevention, and linkage to care efforts, the Hep B United coalition was established in 2011 by the Hepatitis B Foundation and the Association of Asian Pacific Community Health Organizations (AAPCHO) to provide a community network for sharing best practices, resources, and capacity building. Hep B United is a national coalition of over 40 national and community-based hepatitis B organizations in 31 cities, 21 states and the District of Columbia. The coalition is dedicated to reducing the health disparities associated with hepatitis B by increasing awareness, screening, vaccination, and linkage to care for high-risk communities.

How is Hep B United working toward hepatitis elimination?
From Mississippi to Ohio to California, local community coalitions  comprised of health and social service organizations, local businesses, academic research institutions, federally qualified health centers, local and state health departments, student organizations, and others are working to:

END_OF_DOCUMENT_TOKEN_TO_BE_REPLACED

Continue reading Uniting to Eliminate Hepatitis B in the United States →

As an extension of the Know Hepatitis B Campaign, the Centers for Disease Control and Prevention (CDC) in partnership with the Hepatitis B Foundation and the Coalition Against Hepatitis for People of African Origin (CHIPO) has released new educational materials focused on African immigrant communities.

Join Hep B United on Wednesday, March 11th at 3:00 PM EST for a webinar to discuss why representation, including of persons living with hepatitis B, is essential to research, and communication and outreach strategies to improve diversity in clinical trials! Christine Lee, PharmaD, PhD, from the U.S. Food & Drug Administration (FDA) will be providing an overview of clinical trials recruitment and strategies to improve participation and Rhea Racho, MPAff, will discuss the Hepatitis B Foundation’s participation in the National Institute of Health’s All of Us Research Program and how the program is working to make medical research more inclusive. 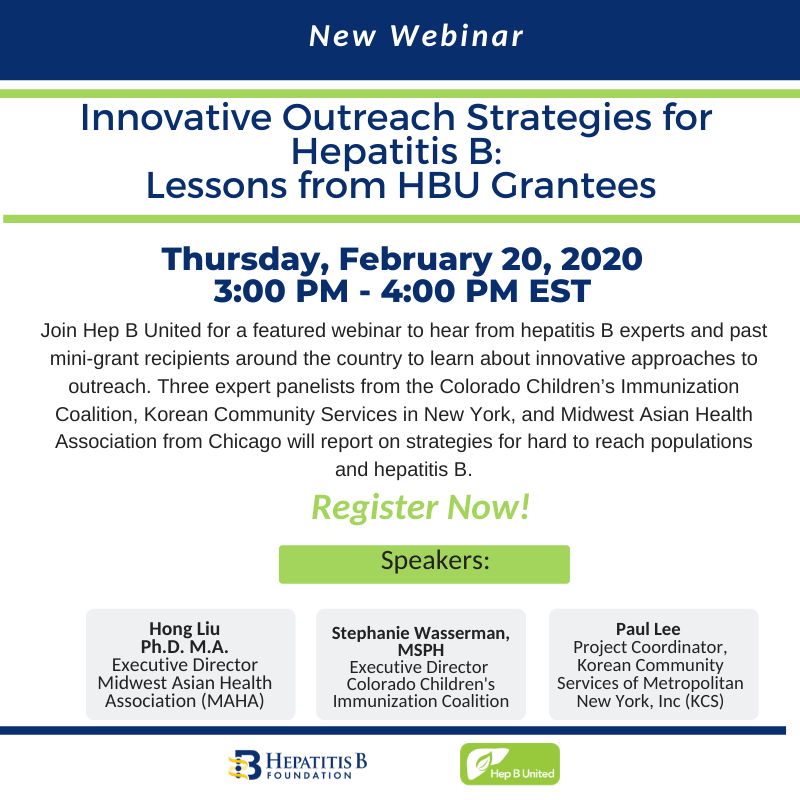 Join us on January 29, 2020 at 11:00 AM EST for a webinar on Hepatitis Delta Treatment Endpoints: How Do We Measure Success in the Era of Emerging Therapies?

Hepatitis delta, a dangerous coinfection of hepatitis B, is estimated to affect between 15 and 70 million people across the world. For decades, the only treatment option has been pegylated interferon; an often difficult drug to tolerate with only a small chance of controlling liver disease. With many new drugs now in clinical trials for hepatitis delta, we must ask, what does successful treatment look like?

Join hepatitis delta expert, Dr. Ohad Etzion, as he outlines the challenges in controlling the disease, current clinical trials, and explores ideal endpoints for treatment and control of hepatitis B and delta coinfection.

Please join the Hep B United Coalition on December 10, 2019 at 2:00 PM EST for a webinar to discuss access to hepatitis B treatments. 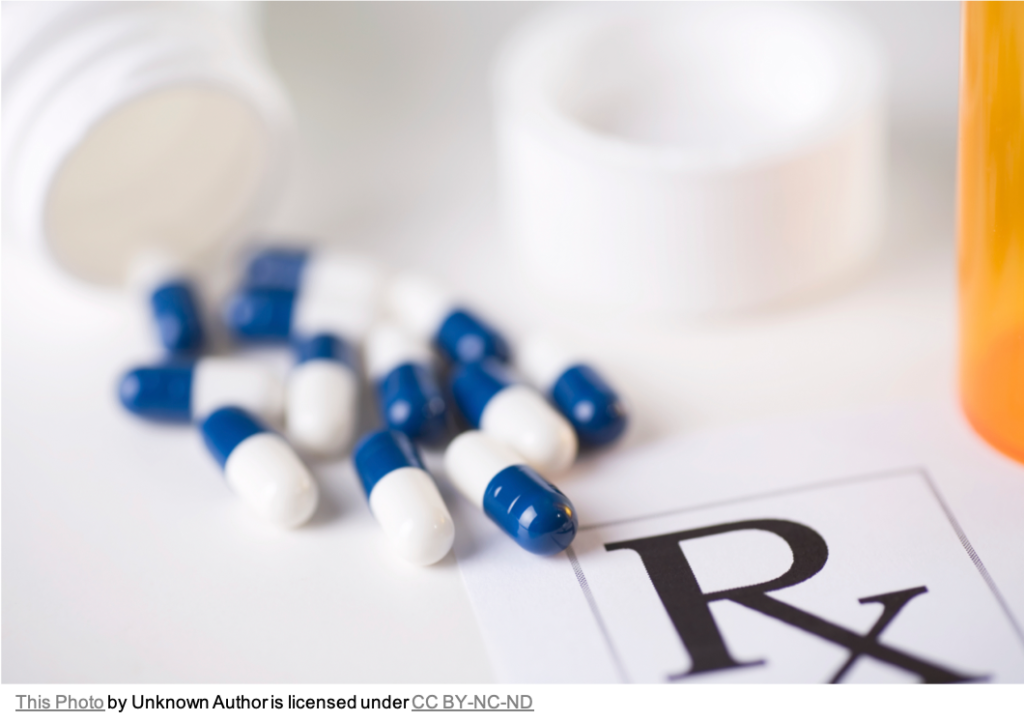 The 2020 Open Enrollment Period is here! As individuals, organizations, and patient navigators search for the best health insurance plans, join this session to learn about discriminatory practices by some health plans that may impact persons living with hepatitis B, including “adverse drug tiering” and the use of “co-pay accumulators.”

Panelists will discuss research findings of hepatitis B treatments offered by health plans, resources for prescription assistance, and provide an overview of and opportunities to get involved in federal and state legislative advocacy efforts to combat discriminatory practices by health insurers.